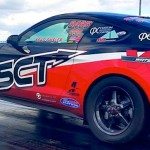 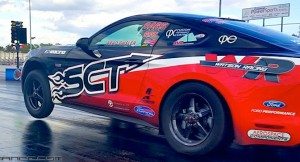 It was only a matter of time before an EcoBoost Mustang broke through the 10-second barrier. The odds-on favorite to set this record was Brad Gusler of BG Racing. He put the Mustang world on notice back in March of 2015 when he clicked off an 11.19 at 119 mph. It’s taken a lot of work and refining of the combination, but on Wednesday Brad and his Mustang broke into the 10-second zone—three times in a row!

Knowing he would soon approach the limits of the stock engine if he kept pushing the combination with more boost, Brad commissioned Custom Performance Engineering to build a fortified 2.3-liter short-block for his Mustang. Now you might be aware of CP-E’s vast line of EcoBoost bolt-on parts for everything from Fiesta STs to EcoBoost Mustangs, but the company also builds engines. As such, engine builder Mitch Levy created a robust short-block to withstand Brad’s 10-second quest. 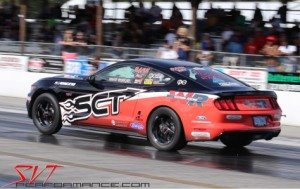 We thought Brad Gusler might re-set the EcoBoost Mustang e.t. record during the EcoBoost Battle at the NMRA World Finals. That didn’t quite work out, but in the ensuing weeks he labored with support from Custom Performance Engineering and Revolution Automotive to pilot his EcoBoost Mustang to the first 10-second passes on record.

“Before Bowling Green CP-E did their built short-block, which will be available soon. We left the stock head and cams in place for now,” Brad said. “They also did their FuelBAR Kit with four DeatschWerks 75 lb/hr injectors and it also has DeatschWerks’ new direct-injection GTDI injectors in the motor.”

Of course, Brad rushed to get the new combo ready for the EcoBoost Battle at NMRA World Finals in Bowling Green, Kentucky, but that meant time was short. It didn’t help that the weather wreaked havoc on the available track time either. So, after the event Brad and his team set out on a two-week mission to put his turbocharged four-cylinder into the record books again.

At the suggestion of Adam Marrer of Pops Racing, Brad brought in Adam Browne of Revolution Automotive to help overcome some tuning quirks that he’d been fighting on this somewhat exotic combination that’s still under the sway of a factory PCM. Adam worked up a custom SCT calibration to control the new combo. At this point, that combo includes the aforementioned short-block, a CP-E turbo kit with a much larger turbo and intercooler, plus the first set of Aerospace Components’ new dual-caliper rear brakes, which are crucial to building boost off the starting line. 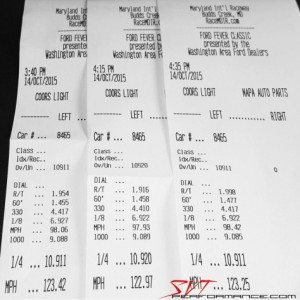 Brad found his groove at Maryland International Raceway. Once the combination came together, his four-cylinder 2015 Mustang ran three 10-second passes in a row—a 10.91, a 10.92, and a 10.91—in less than an hour.

“Within 24 hours I rearranged my whole schedule and headed down to CP-E where his car was on the dyno. We worked from 2 p.m. to 3 a.m. that Wednesday into Thursday morning. All of the work on the dyno was getting the car to make the power safely and keep the boost consistent,” Adam said. “That Friday the 9th I met Brad and the CP-E crew at MIR for some on track testing. Again we ran into more hiccups with getting the trans to cooperate with the 3.73 gear change, Circle D converter and the removal of the paddle shifters and clock spring in the steering column. By the end of the night we were making progress, but were cut short by a drenching thunderstorm.”

Knowing he would soon approach the limits of the stock engine if he kept pushing the combination with more boost, Brad commissioned Custom Performance Engineering to build a fortified 2.3-liter short-block for his Mustang. Now you might be aware of CP-E’s vast line of EcoBoost bolt-on parts for everything from Fiesta STs to EcoBoost Mustangs, but the company also builds engines. As such, engine builder Mitch Levy created a robust short-block to withstand Brad’s 10-second quest. 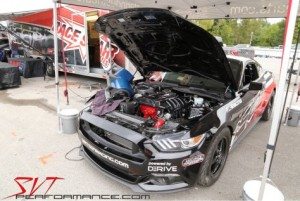 Brad has constantly tweaked his EcoBoost combination since he blasted off that low-11-second pass back in March of 2015. Now the car wears a C-PE turbo kit with a larger turbo; an upgraded fuel system including Deatchwerks injectors and a CP-E FuelBAR Kit; and SCT tuning support from Adam Browne at Revolution Automotive.

Now time was running short. Adam could only afford so much time away from his shop, and Brad had to prep his Mustang for a trip to The SEMA Show in a few weeks. They had one more crack at the record, so the team regrouped for one more day of testing. 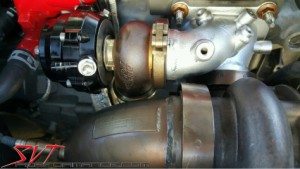 Check out the sweet, cast manifold adapter that allows the installation of the huge Precision Turbo unit that is the centerpiece of the CP-E turbo upgrade. Brad says there’s a lot left in this combination.

With the new combination dialed in, Brad and his wife Nina headed back to Maryland International Raceway in Mechanicsville, Maryland, for a private track rental on Wednesday October 14. There they once again had support from Adam as well as Mitch Levy and Trip Ulvila from CP-E. All the long hours, hard work, and sleep deprivation paid off, as Brad became the first driver to pilot a 10-second EcoBoost Mustang. Watch the car run the number right here…

“The last two weeks have been working non-stop to get where we are now. We basically didn’t have enough time to get the new combination dialed in before NMRA finals race. There were a lot of hurdles to get past to get this kind of power to the ground,” Brad explained. “We dialed it back to keep things happier and the results of that was 10.9s. Now we will slowly keep adding power back versus throwing it all down at once.”

Easing into things is not something Brad is known for. He wants to run quickly and he doesn’t want to wait. However, with all the new power capability on board, he is taking a slower steadier pace to putting the power down.

“The Precision 60/62 is making a lot more power than the previous 55/58 I had. Also the Circle D converter and Aerospace dual-rear-caliper brakes make the car leave with 1.4 60-foots all day long.  Watson Racing knows how to build a chassis! The car just hooks.” 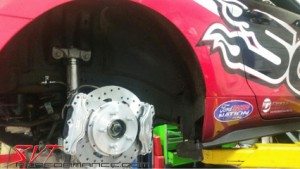 Since there isn’t a transbrake option on the latest Mustangs, it can be difficult to build boost at the starting line. To get the boost up before he launches, Brad uses these dual-caliper rear brakes from Aerospace Components. This is the first system of its kind, and Brad requested that Aerospace build this kit so other EcoBoost owners will be able to take advantage of this setup.

With Adam Browne working his magic behind the keyboard Brad was able to upload a custom SCT calibration into his EcoBoost Mustang to make it run with this unique combination, and run it did. Adam really had it dialed in because it ran 10.90s like a bracket car at MIR. “I started with a fresh base file using SCT’s software. And, yes, we found multiple clips and limits that he was hitting by referencing some of his older datalogs,” Adam said. “Getting a factory ECU to play friendly with an aftermarket boost controller was challenging but the end result was worth all of the time invested.” 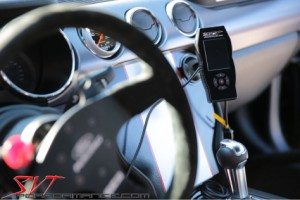 Of course, this is far from the end of the story on the record-setting BG Racing EcoBoost Mustang. Brad will continue pushing the combination, and with cooler weather upon us, there is no telling how low those e.t.’s could go. Brad is keeping the dyno numbers to himself, but clearly he’s optimistic about the car’s future potential.

“The car has a lot more in it. The year isn’t over yet and that good air is on its way,” Brad teased. “Knowing how much boost and timing we had in it yesterday compared to what it’s had in it before, the car will be a lot faster.” 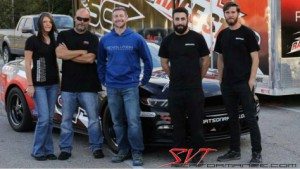 World’s first 10-second EcoBoost! Huge thanks to everyone involved, especially the team at CP-E and Adam at Revolution Auto for the grueling two weeks since Bowling Green,” Brad announced on social media after achieving his goal. “All the sleepless nights and trips to the track were worth it! Thank you to all my sponsors!” In addition to all those sponsors, his direct support at the track came from (from left to right) his wife Nina, Adam Browne of Revolution Automotive along with Mitch Levy and Trip Ulvila from Custom Performance Engineering.