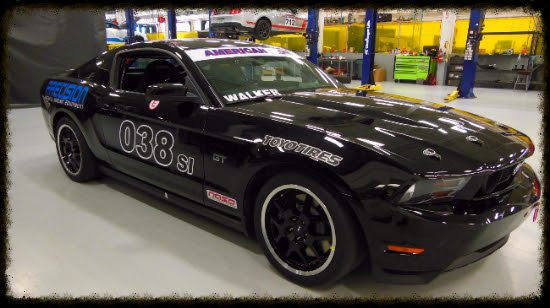 ROAD RACING ON A BUDGET? WATSON RACING HAS THE SOLUTION!

Complete Spec Iron Road Race builds, fully caged, lightened and race-prepped 2005-through-2010 Mustang GT coupe. As seen on these pages, Spec Iron Road Race Builds embellished with series-specific modifications that come primarily from Ford Performance. Just to be clear: That’s not a conversion price; it’s the price for the whole car. As delivered, that coupe will be fully capable of winning in Spec Iron—provided, of course, the driver is equally capable. 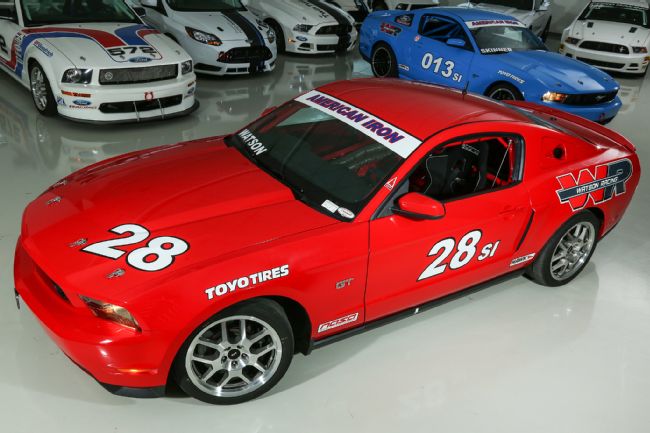 Sure, affordable is a relative term, especially when it comes to motorsports. But if road racing is on your Mustang must-do list, the experienced hands at Watson Racing will build you a highly competitive S197. Spec Iron Road Race Builds to campaign in NASA’s popular Spec Iron race series for less than you might think. Let’s jump right to the bottom line. Roughly $35K to $38K will buy you a complete, fully caged, lightened and race-prepped 2005-through-2010 Mustang GT coupe. As seen on these pages, Spec Iron Road Race Builds embellished with series-specific modifications that come primarily from Ford Performance. Just to be clear: That’s not a conversion price. It’s the price for the whole car. As delivered, the Spec Iron Road Race Builds will be fully capable of winning in Spec Iron. Provided, of course, the driver is equally capable.

A while back, NASA (the National Auto Sport Association) created the Spec Iron class. The class is under the umbrella of its American Iron series. Participation in Spec Iron’s class strictly limited to 4.6L 3V-powered (meaning 2005 through 2010) S197 coupes. By carefully limiting permitted modifications, NASA designed the series to encourage safe, exciting, and competitive amateur-level road racing. All while keeping vehicle reliability and durability high and overall costs low. These budget-conscious goals accomplished by mandating factory-stock 4.6L 3V GT engines.  Also, stock transmissions, driveshafts, clutch design, and rear axles. While allowing only specific handling and braking upgrades such as those detailed in the accompanying captions.

The minimum weight for NASA’s Spec Iron Mustangs is 3,350 pounds (with driver). Any temptation to cheat on the stock engine rule warded off by strict 11.75 pounds-per-rear-wheel-horsepower (and 11.25 pounds-per-torque) minimums. But make no mistake: A dual-purpose street Mustang or a weekend open-track warrior isn’t going to make the grade in Spec Iron. This is a series for purpose-built race cars like those crafted by Watson. To view or download a complete set of Spec Iron rules, go to nasaproracing.com/rules.

For those unfamiliar with Watson Racing, we’re not talking rednecks with wrenches here. Located just a few miles up Interstate 75 from the Mustang’s Flat Rock assembly plant. Watson Racing and Watson Engineering) boasts a long and successful engineering and fabrication history. Furthermore working with FoMoCo and in recent years heavily involved with Ford Racing’s triumphant Cobra Jet and Boss 302S Mustang programs. Without a doubt, Watson knows what it takes to make Mustangs track-worthy.

In brief, the process of a Watson Spec Iron build goes something like this. The staff finds and buys a 4.6L S197 GT in clean, original condition as a starting point, wheels it into the shop, and guts the interior and trunk right down to metal, including scraping out all signs of factory sound deadening and sealer. During this teardown, the coupe’s HVAC and entertainment systems, interior upholstery, airbags, door glass, and innards (and pretty much anything else not explicitly needed for racing) also get the boot. Even the factory wiring harnesses lightened the build and neatened by removing any branches or switches previously connected to these removed components.

Watson’s fabricators then weld in a stout six-point roll cage with double door bars on each side, clearly enhancing driver safety but also greatly increasing unibody rigidity. Those areas stripped in the teardown (the full cabin, the door shells, and trunk, and so on) are then resprayed to match the exterior color. Then begins the process of unbolting stock suspension, braking, exhaust, and other components and substituting replacement hardware from Ford Performance and other suppliers. The end result, a competition-ready coupe not delivered to a customer until corner-scaled to set up new coil overs, and receiving aggressive, track-oriented alignment.

Alternatively, should you already possess a suitable stock S197 GT candidate, Watson can convert it to a Spec Iron racer on a low-budget, depending on options. For more details, check out our photos and captions, or give Watson Racing a call. 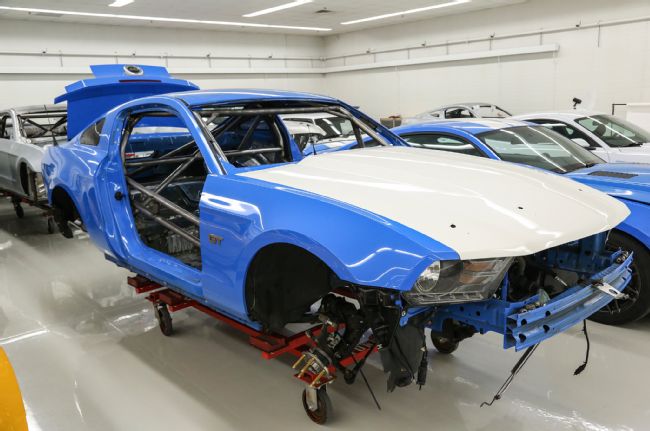 1. Aside from the two completed cars in our lead shot, in the Watson Racing shop at the time of our visit was this Grabber Blue 2010 GT. It was part way through the conversion to Spec Iron racer. This S197 had a damaged hood at purchase. So picture shows a new hood prepped and primed, complete with holes for the mandated four hoodpins. Also note the mounting tab for a front towhook, welded onto the factory bumper reinforcing bar. Also, NASA requires hooks front and rear. 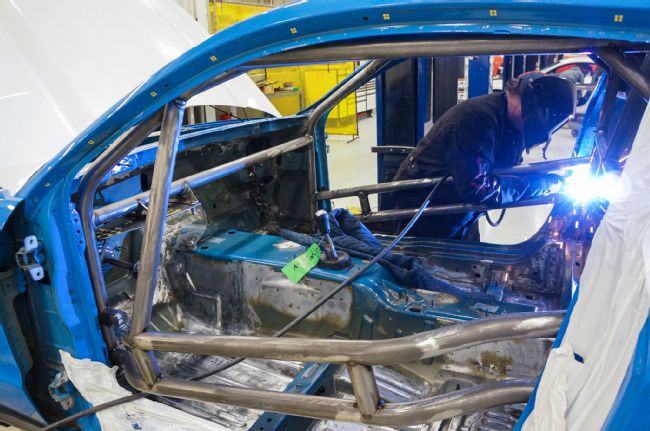 2. Watson starts each build with a clean 2005-2010 GT coupe having the rules-required stock drivetrain. Interiors, stripped of nonessentials, including sound deadening and seam sealer. Same for the trunk. A road-race cage to NASA specifications welded in place. 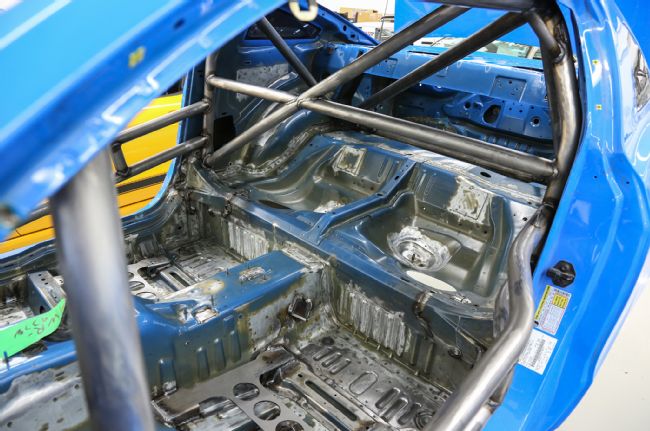 3. Here is some cage detail, also showing welded-in seat bases for the race bucket(s.) Watson’s cage design is sort of a hybrid between the older FR500S design and that of the Boss 302S. Tube architecture is 1 3/4-inch DOM (drawn-over-mandrel) with a 0.120-inch wall thickness. 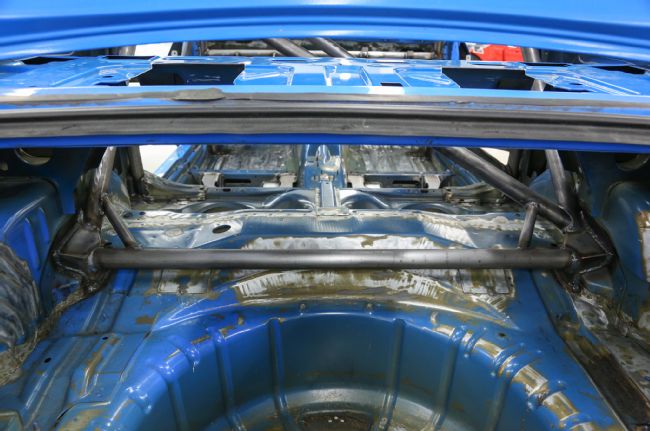 4. More cage detail, seen from the also-gutted trunk. Many, many man-hours go into this stripping, preparation, and structural fabrication. 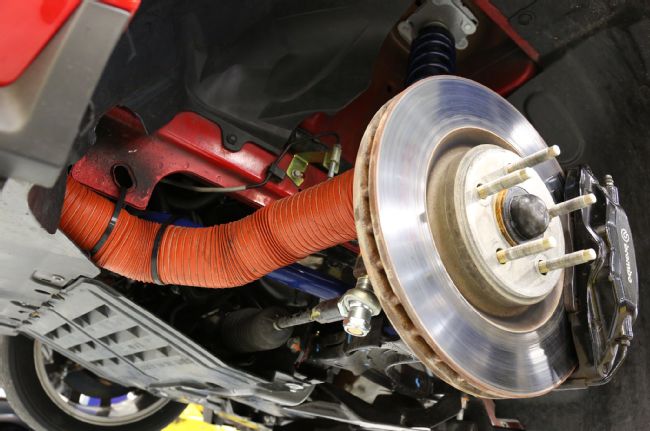 5. These chassis shots that follow of the red car. This was the first Spec Iron car that Watson built, and is raced by Chuck Watson Sr. FRPP’s familiar M-2300-S brake kit is used up front. It’s ducted 14-inch, one-piece rotors are the largest allowed in Spec Iron. Rear rotors remain stock but are clamped by upgraded pads. Also visible here are FRPP’s bump steer kit (PN M-3130-R4) and the front component of the M-5490-A sway bar kit. 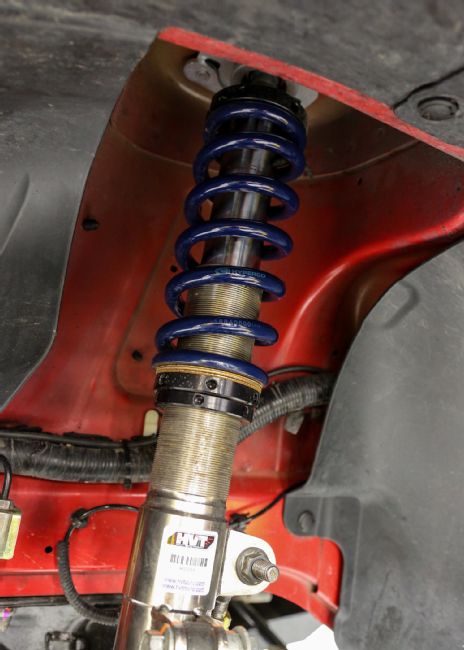 6. Twelve-position, single-adjustable HVT’s “Spec Iron” units are the only permitted coilovers in class, and are used front and rear. Spring rates are unregulated. 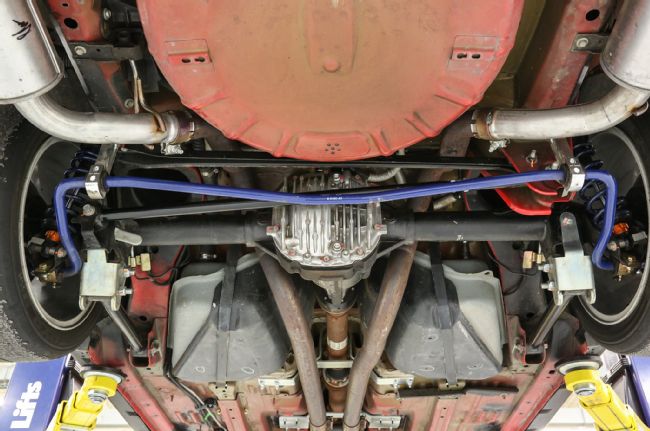 7. A stock-style 8.8-inch axle must be retained for Spec Iron, though it can be fitted with 3.73 gears, FRPP’s M-4033-KA aluminum diff cover, and M-4204-T31H Torsen T2R differential. Also seen here are the allowed FRPP rear sway bar and adjustable Panhard bar (PN M-4264-A.) Not visible is the permitted adjustable upper (third) link (not manufacturer-specific, as long as it bolts to the factory mounting points at both ends). 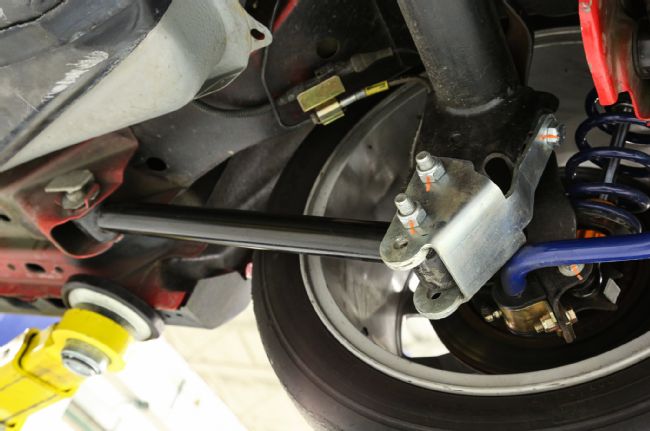 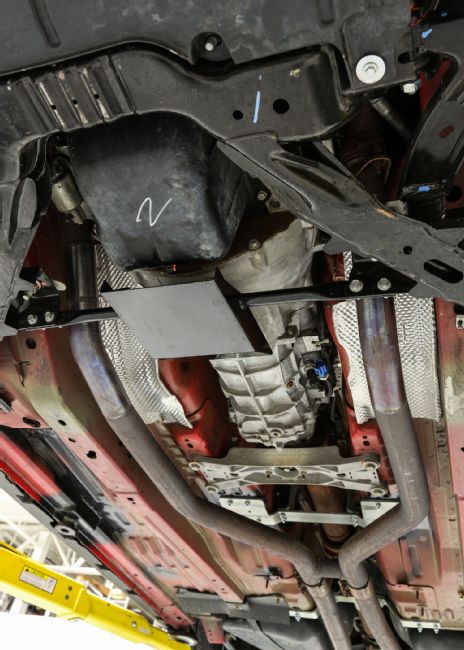 9. Rules require retention of the factory exhaust manifolds, but from there on back the choice of exhaust system is basically unrestricted. Naturally, all cats are deep-sixed. Though this prototype had a fabricated H-pipe, Watson now uses an off-road, X-shaped crossover unless the customer has a different preference. Also note the FRPP M-5025-MBR transmission scoop, as found on the Boss 302 Laguna Seca, used to cool the stock TR3650. 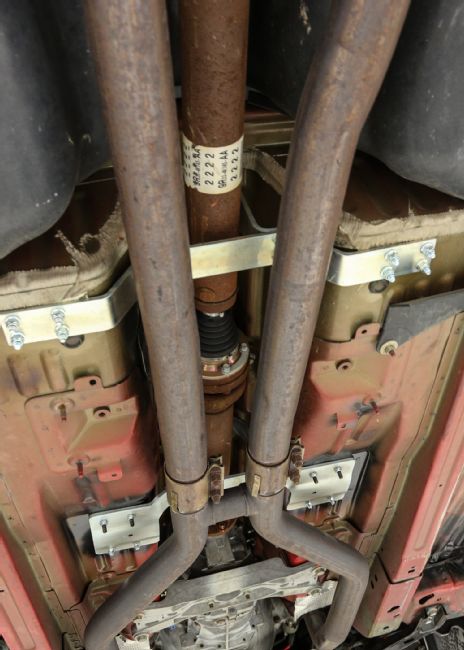 10. Because the rules mandate a stock two-piece driveshaft, Watson installs double safety loops on each of its racers. Also, Spec Iron rules permit use of the stock fuel tank (visible here) but provide for use of a fuel cell if desired. 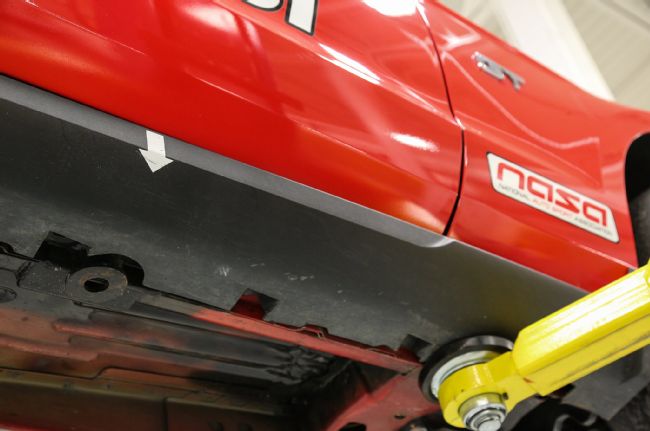 11. The arrow conveniently points to one of a pair of jacking points welded beneath the rockers. These are situated so the jack will lift each side’s front and rear wheels at once, for those speedy pit stops. 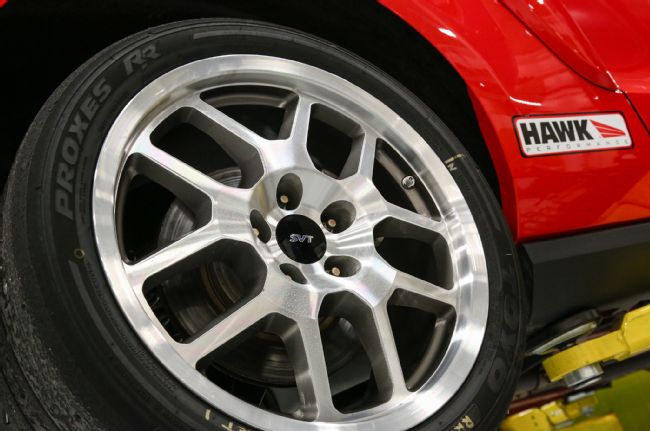 13. Rules for body mods are strict, permitting only 2005-2010 Mustang V-6 or GT stock exterior body components, including front and rear fasciae, spoilers, or wings. Watson does modify the nose of the racers by placing inlets at the outboard corners of the lower grille for the allowed brake ducts. Watson also makes sure that any factory obstructions are removed from the upper grille and foglight openings. 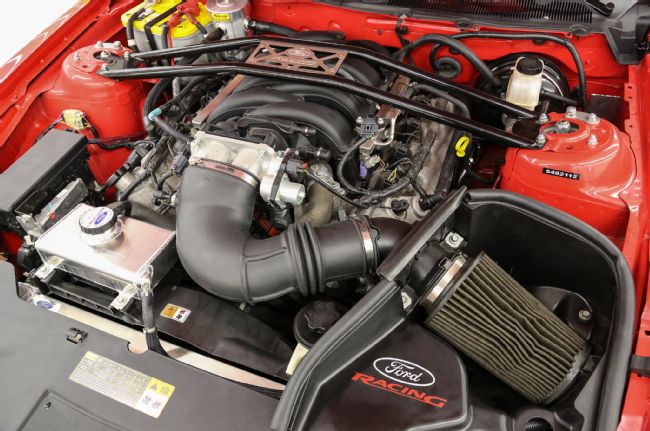 14. Engine internals must remain utterly stock for Spec Iron, but FRPP’s M-9603-GTB or M-9603-MGT cold air kits are permitted, along with FRPP’s included calibration. The radiator overflow vent line must terminate in a catch can, and an FRPP coolant expansion/fill (degas) bottle is permitted. Breather cans, such as the Peterson unit seen back at the firewall, are allowed for the engine, tranny, and rear axle. 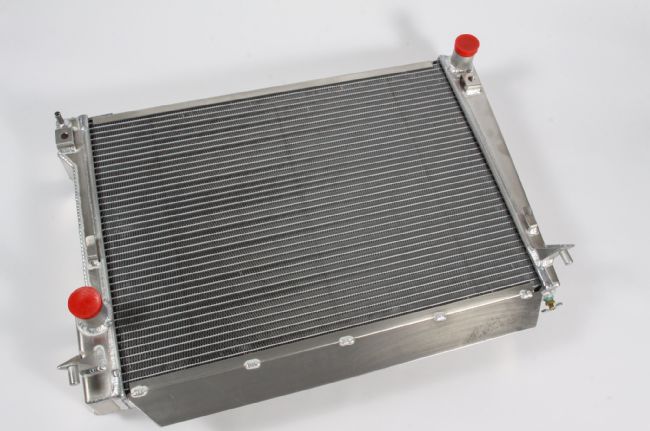 15. Spec Iron’s only allowed radiator upgrade is this M-8005-MGT part from FRPP, though shrouding or fans are unrestricted. 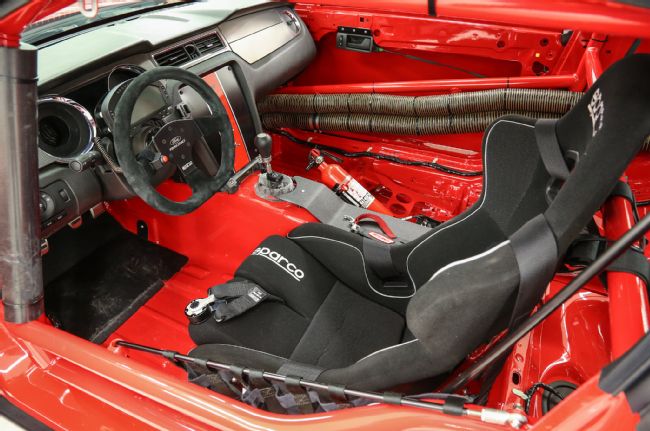 16. While the Spec Iron racer’s exterior and underhood remain purposefully stock in appearance, the interior gives no doubt that this is a hardcore track addict. Your coupe from Watson Racing will come fully painted and furnished with a Sparco race bucket within easy reach of a Sparco/Ford Racing flat-bottom steering wheel. A seat harness and window net also form part of the package. Note that the ducting visible here is part of an optional driver cooling system that draws outside in through NACA ducts in the rear-quarter windows. 18. With all HVAC and entertainment systems gone, Watson finishes off the center stack with a block-off plate, including an ignition switch and start button. Though the Tremec 3650 must remain, the choice of shifter is wide open. 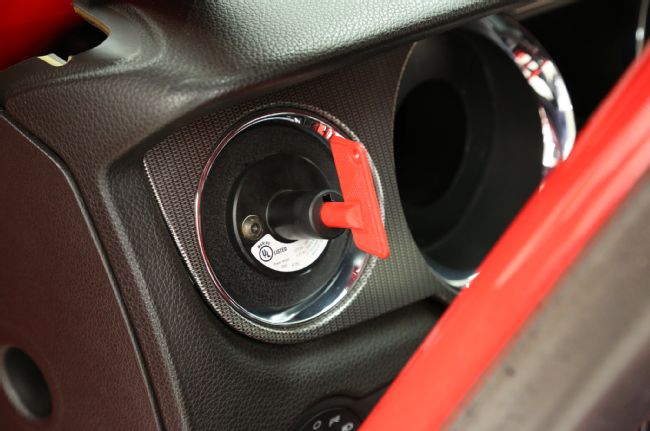 19. Watson places the mandated electrical master switch in the old driver-side vent location. Over on the passenger side, an OBD-II port sprouts from the other dash vent. Where it is easily accessible to NASA officials who, in the process of checking calibration legality, may reflash PCMs at their discretion. 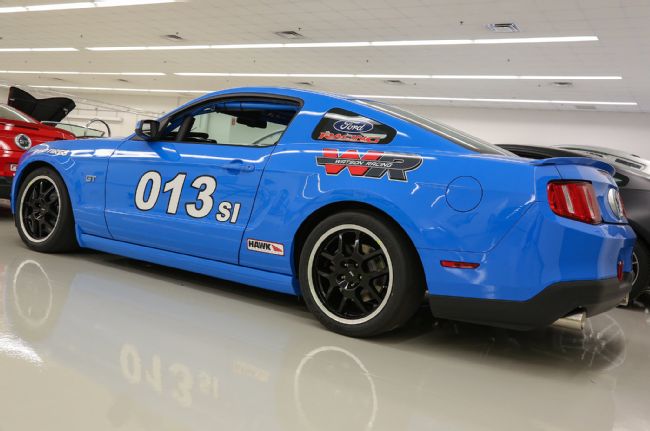 20. Another completed customer Spec Iron racer awaits delivery in Watson Racing’s Brownstown, Michigan, headquarters. Yours could be next.

Since these were published Watson Racing has built several others – visit our Customers rIdes page.  >>

So, if you have considered building a track day car or Spec Iron Road Race Builds this is for you. Also, if you want to see what it takes to get into a full Spec Iron race car. Please call Watson Racing – 855.WAT.RACE. Also, feel free to email sales [at] watsonracing.com.