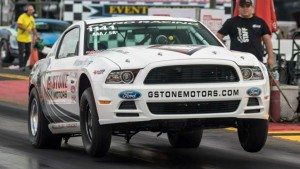 Watson Racing track crew worked on this 2013 Cobra Jet including a couple rebuilds in Bradenton, 2015. All the hard work paid off and the car is currently running its’ best ever, in fact Gardner won the FS/A class at the 2015 NHRA Gatornationals in Gainesville Florida in March, 2015 with an 8.89 ET at 154 MPH.