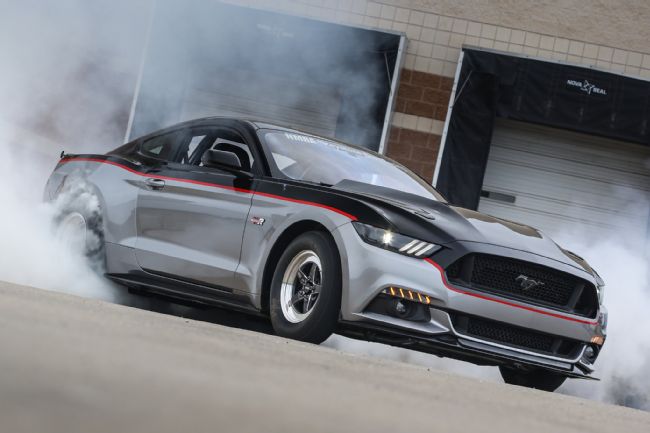 Despite what you see, Watson Racing’s original idea had been to build a road-race-themed S550 for the SEMA show in Las Vegas. It was the crew at Ford Performance who suggested the project should instead have a quarter-mile treatment. Truth be told, either approach would have made perfect sense, since Watson Racing (and its parent company, Watson Engineering) has in recent years been responsible for final assembly of both the road-course Boss 302S and the straight-line Cobra Jet “catalog” cars for FoMoCo. In the end, Watson chose to go the drag-warrior route, creating this purposeful tri-tone fastback, and taking the opportunity to engineer some unique, racy chassis parts along the way.
Story Author –  Dale Amy  – Muscle Mustangs and Fast Fords 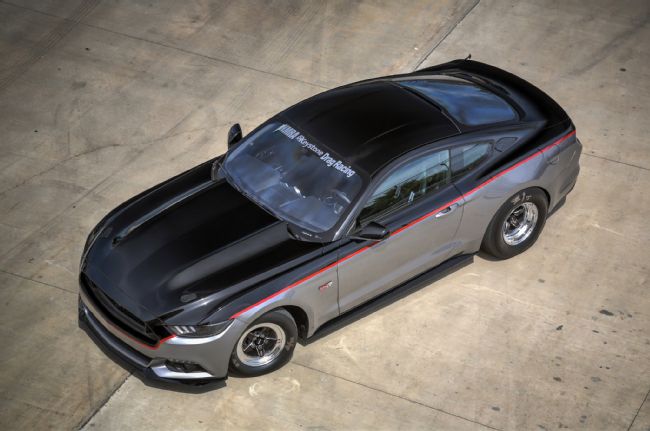 Choosing to forego the glitz that is sometimes the hallmark of SEMA cars, the focus was instead on function. To shed some 30 pounds of nose weight, Watson’s experienced fabricators engineered a complete TIG-welded tubular K-member and front suspension setup. Into this chromoly cradle they bolted a 5.0L Coyote (built in house) toughened with Oliver rods and Mahle pistons, tweaked with Ford Performance cams, tuned via FAST XFI, and topped with a 2.9L front-inlet, twin-screw supercharger. Through a Tremec Magnum XL six-speed, the combo sends a “conservative” 927 hp and 702 lb-ft to the rear wheels. 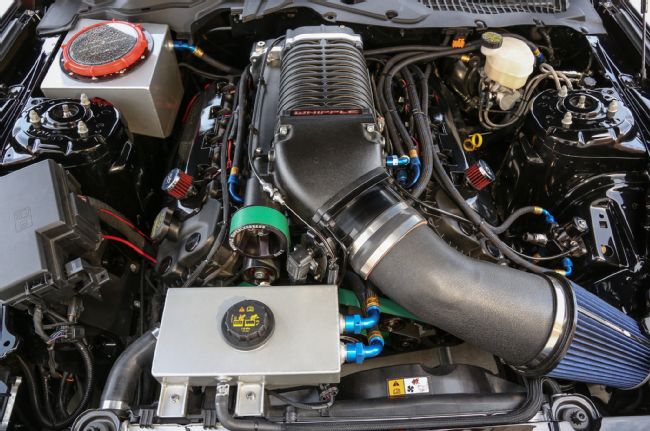 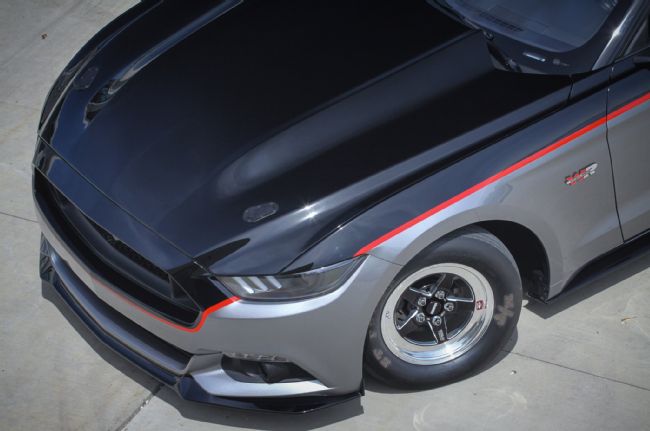 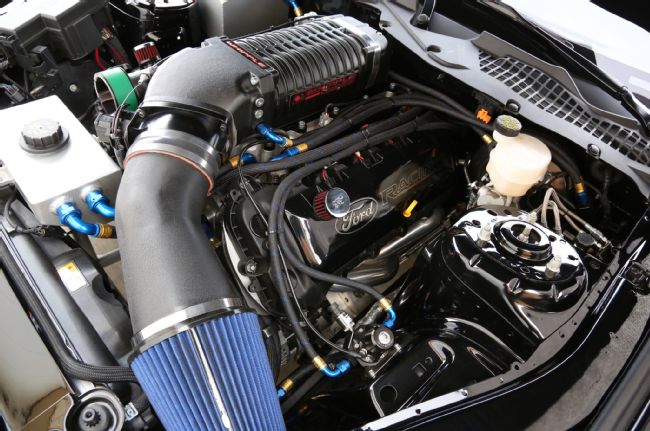 In order to mount those particular rear wheels—which, in true drag tradition, are only 15 inches in diameter—Watson’s guys placed Wilwood disc brakes inboard within an all-new tubular subframe supporting a fabricated 9-inch centersection. As was the case on the front suspension, much time was spent configuring the tubular control arms for proper camber geometry under bump and rebound. For those of you who have S550 dragstrip plans of their own, Watson plans to offer both these front and rear tubular assemblies. 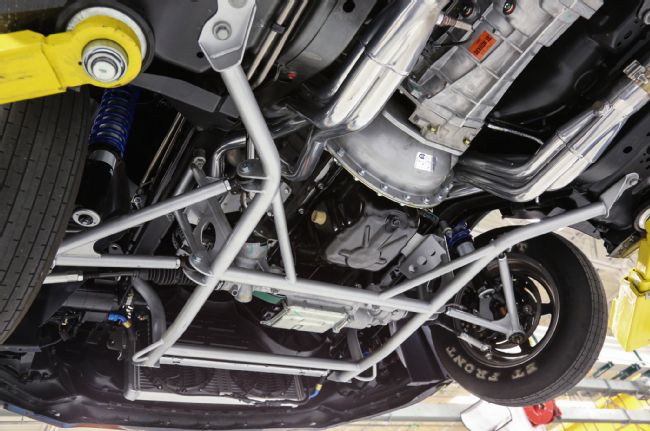 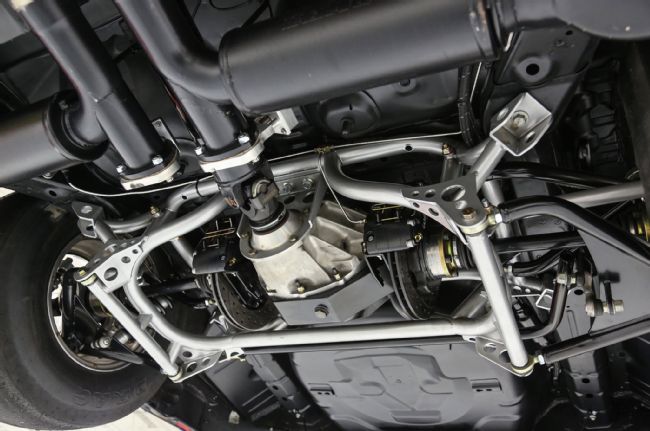 The same approach was taken out back, with a full tubular replacement kit, featuring inboard discs and a 9-inch center section. This shot also shows the exhaust system’s electric cutout configuration.

While much of the build was focused on getting the fastback as light as reasonably possible (it now weighs less than 3,300 pounds), the custom leather and suede interior performs show duties in stylish fashion. Still, this is a race car at heart, and the cabin is accordingly equipped with Watson’s own weld-in, six-point cage, Sparco Evo 3 race buckets trimmed with Teamtech harnesses, and one of the wildest (and no doubt priciest) steering wheels ever seen in a Mustang. The quick-disconnect wheel—interestingly named a GT 350—comes from AiM in Italy. It is outfitted with not only a center-hub data display surrounded by a slew of multifunction buttons but also with a multihued shift light array tucked into the top rim. This thing is high-tech art wrapped in leather. 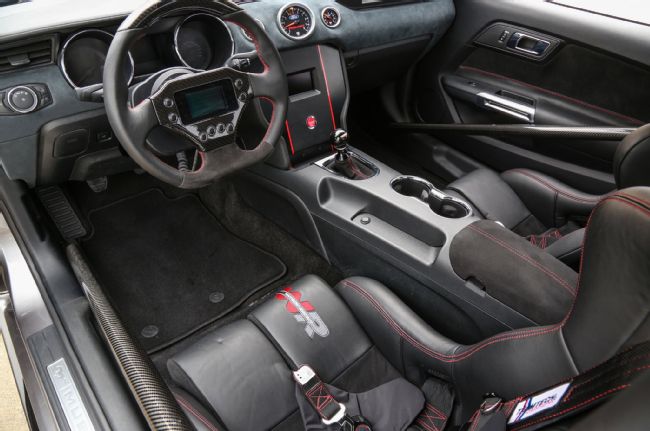 Another trick cabin embellishment is the sanitized center stack—now missing all its factory HVAC/entertainment hardware and occupied only by a start button, and topped with a custom-fit trio of Ford racing gauges angled towards the driver and surrounded in Alcantara.

At this point we would love to wow you with some kick-butt time slips, but between the long Michigan winter and the travel demands of show/event appearances, strip time has been almost nonexistent. Also, the fastback’s couple of shakedown runs to date have encountered the usual new-car gremlins. Our photo should be clear evidence, however, that this SEMA star has no problem smokin’ the slicks. There is no plan, or time, to campaign the car in any particular race series; instead, Watson will use it as a research and development test bed for more S550-related street/strip hardware. Check out our table for a full list of specs. 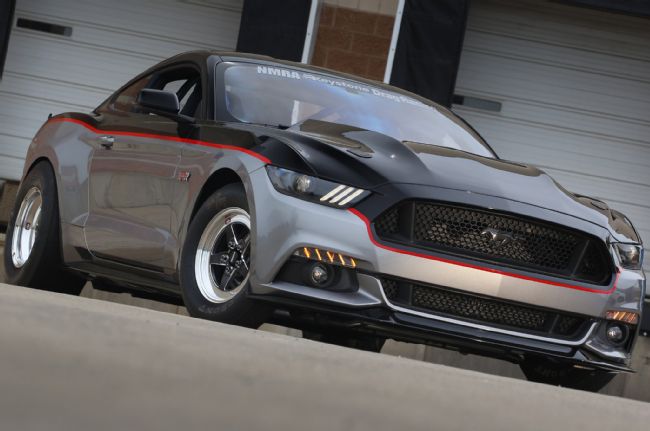 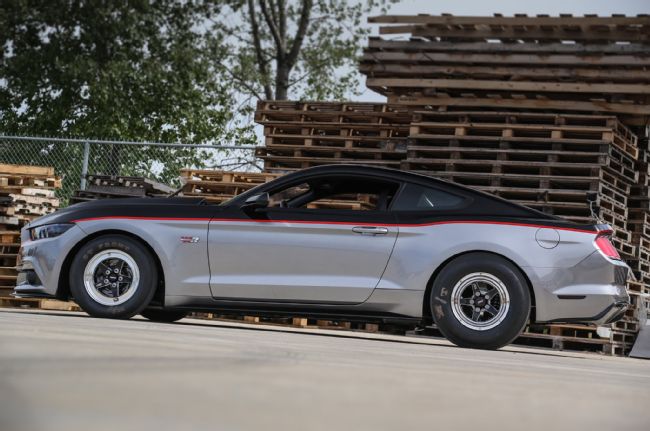 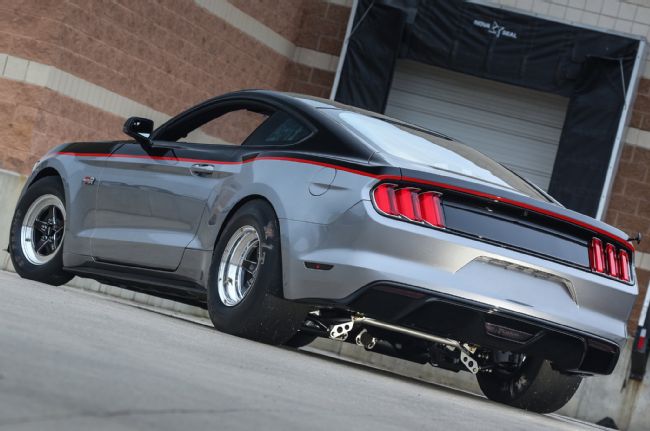 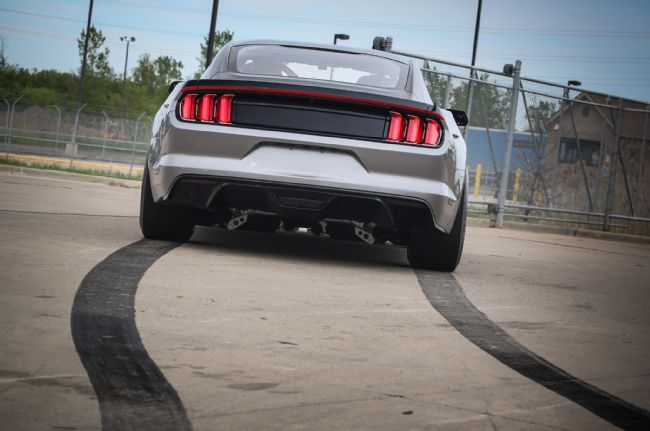